Professor Gokay Deveci from Robert Gordon University’s Scott Sutherland School of Architecture and Built Environment has received four national design awards for a successful Knowledge Transfer Partnership (KTP) agreement with a local construction company which resulted in the building of a sustainable model house in Aberdeenshire. 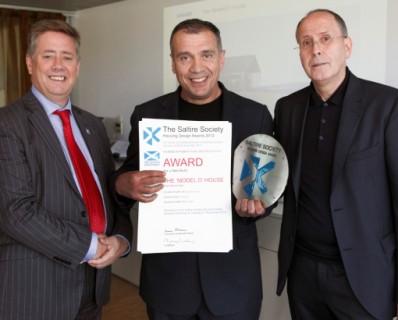 The Model-D Show House at Pitmachie, near Insch, built in partnership with local firm Sylvan Stuart Ltd, was officially opened by First Minister Alex Salmond in November 2011. Constructed almost entirely from Scottish timber, the house was created from a concept aimed at exploring affordable, low-carbon homes which could be easily constructed in rural communities.

The first of the Model-D’s quadruple plaudits was awarded in July, when it was announced as one of the Royal Incorporation of Architects in Scotland’s (RIAS) inaugural award winners, representing the very best of current Scottish architecture.

The Model-D was also the only recipient of a newly established RIAS award, sponsored by Wood for Good and the Forestry Commission Scotland, which seeks to stimulate greater appreciation of home-grown Scottish timber. The award was bestowed on the Model-D house as it best demonstrated the use of timber in construction out of all the shortlisted entries.

The industry acclaim did not stop there however, as earlier this month the Model-D was announced as a recipient of the prestigious Saltire Society’s 75th annual Housing Design Awards.

Recognised in the ‘Private Dwelling – New Build’ category, Professor Deveci, no stranger to Saltire accolades having received awards in 2004, 2005 and 2011, was presented with his award at a ceremony in Edinburgh by Scottish Minister for Housing and Transport, Keith Brown MSP.

This year saw an unprecedented number of submissions for the Awards, with over 70 entries from virtually every geographical region and built environment in Scotland, with the final winners highlighting the most dynamic and challenging housing projects completed in the last year. 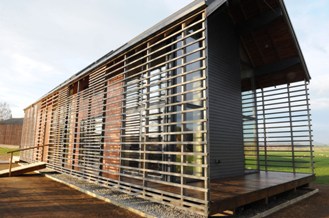 on a local and national scale for our KTP project which offers a model for affordable housing stock in the countryside. The alternative contemporary design of the Model-D house draws upon the architectural language of traditional agricultural buildings and incorporates energy efficient features.

“The design utilises its setting and natural daylight to radically reduce energy costs. Large windows in the south façade take advantage of solar gain and maximise views, and an external rain screen provides shading and privacy.”

The Model-D, which was also nominated for a Scottish Design Award in the Affordable Housing Category, obtained it’s most recent recognition on 7 September when it came ‘Highly Commended’ in the Sustainability Category of the Aberdeenshire Design Awards.

The Awards, conferred by Aberdeenshire Council, aim to encourage and improve environmental design and architecture in the region. The Model-D House was recognised for its ‘splendid use of native timber to produce a dwelling house with a low carbon footprint designed to minimise maintenance requirements and meet passive house standards’.

Finally, the Model-D has also been put forward in the shortlist for the RIAS Andrew Doolan 25k Best Building in Scotland Award, sponsored by the Scottish government, with the winner set to be announced in November at the Scottish Parliament.

KTP Architectural Designer, Raju Noor, has recently been employed alongside Research Assistant Gary Smollet, by IDEAS to start working on the next model al to develop standardised construction and a range of low-carbon housing features in order to refine cost-efficient fabrication procedures.