Green fingered students from Robert Gordon University (RGU) are breaking the turf of a sustainable community garden project at Garthdee this weekend. 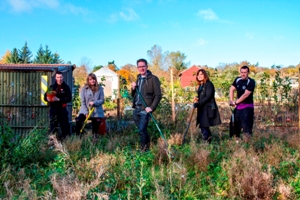 The Students’ Union at RGU is holding a launch day for the community garden which it is creating on a plot of land near to the university’s Garthdee campus for members of the public to use as well as students and staff.

Members of the public are invited to the garden launch day on Saturday, March 22 to help spruce up the plot which will become a working allotment with vegetable and fruit patches as well as flower beds.

Volunteers will be rewarded with refreshments throughout the day which runs from 10am to 3pm and will culminate with a BBQ.

The garden is funded by a grant from the Climate Change Fund (CCF), which awarded RGU:Union more than £200,000 for a proposal it submitted to the Scottish Government initiative with ideas to reduce Scotland’s carbon footprint while maintaining its beautiful landscape.

The Students’ Union has since established ‘Go Green’, a sustainability initiative which provides students with the opportunity to make a significant impact on the environment by getting involved in helping the university to reduce its carbon footprint.

Anthony Browne, climate change manager at RGU’s Students’ Union, who is heading up the ‘Go Green’ initiative, said: “The RGU community garden project is open to anyone as an opportunity to gain hands-on experience in sustainability by producing environmentally friendly home-grown food.

“The garden will become a working allotment for people to grow their own food for free, not only helping the pocket but also helping the environment by mitigating the fuel emissions caused by the vehicles that are used to transport produce to supermarkets.

“RGU:Union is committed to sustainability and the community garden is just one strand of our ‘Go Green’ initiative which is all about engaging with students to get them involved, demonstrating how small measures can be put into place to help reduce our carbon footprint while having fun, meeting new people and gaining qualifications.

“We would encourage anyone who wants to do their bit for the environment to don their wellies next weekend and get involved in what will be a fun day out for all.”

The plot of land is situated at the Garthdee Field Allotments on Garthdee Road, Aberdeen.