Sustainability researchers at Robert Gordon University (RGU) in Aberdeen have been awarded more than £300,000 in funding to further develop their work which aims to create a viable marine energy industry in Indonesia. 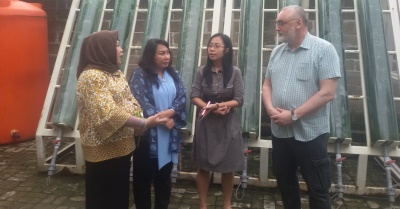 The Centre for Understanding Sustainable Practice (CUSP) at RGU, led by Dr. Alan Owen, have been awarded £183,000 from two UK Government funds to be used to help build up the country’s science and innovation capacity, as well as accelerating the implementation of marine energy in more remote areas, such as Aceh and Lombok.

As a result of this success, a further £118,000 has been granted by the Indonesian Government to support capacity building in marine energy in central Indonesia.

The team was awarded £30,000 through the Newton Fund’s Researcher Links Programme which they will use to host a UK/Indonesia workshop on decentralised sustainable energy for wider Indonesia, in partnership with Universitas Nasional (UNAS).

It is hoped that the event will allow a number of strategic and tactical reports to be developed including an action plan for designing a decentralised, small scale, sustainable energy resources management framework, structure and toolkit for the country.

A further £78,000 was received from the Newton Fund’s Institutional Links programme, which will see the team engage with three coastal communities in Indonesia and help establish a wider network of key people and institutions aimed at building marine energy capabilities in the country. This will be delivered in partnership with Institut Teknologi Sepuluh Nopember (ITS) Surabaya, in Indonesia.

Working with Indonesian Ocean Energy Association (INOCEAN), the team has already completed a UK Department for International Development (UKDFID) funded project to develop a comprehensive resource map, strategic report and road map to take forward the development of marine energy in the country.

In addition to the £118,000 support from the Indonesian Government, the £75,000 received from the UK Government’s Foreign and Commonwealth Office (FCO) Prosperity Fund will support a project which draws on the UK’s world-leading expertise in marine energy to deliver enhanced knowledge exchange between Indonesian and UK governments, business and academia.

The team aims to support and promote the development of marine energy research, development, and implementation in the country through a series of capacity building programmes and has established a strategic partnership with Orkney based company Aquatera to deliver the aims.

Director of CUSP, Dr Alan Owen, said: “We are delighted to have received this funding from both Newton and Prosperity Funds, which will make a huge difference in supporting the work that we are currently doing in Indonesia.

“It strongly vindicates our patient, long-term work with remote communities and national government which has actively promoted UK expertise.”

“Ensuring that there is the relevant knowledge and skills in-country is vital to develop the country’s marine energy capabilities in a comprehensive and sustainable way.”

Managing director of Aquatera, Gareth Davies, said: “Aquatera is very pleased to be working with the CUSP team on this groundbreaking programme aimed at establishing a suitable pathway for Indonesia to develop its marine energy potential.

"We hope that our experience of island based developments and community involvement will be particularly useful in Indonesia.