Students from The Law School at Robert Gordon University (RGU) are celebrating their third successive win at the Granite City Mooting Competition.

Sponsored by Brodies LLP, the annual derby match between RGU and the University of Aberdeen saw law students pit their wits against each other at Aberdeen Sheriff Court. 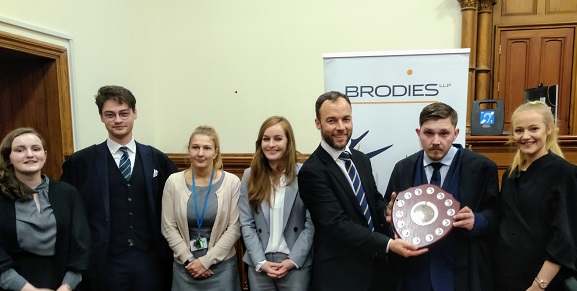 The student rivals engaged in a lively legal debate in front of Sheriff W Summers and academics and students from both universities.

The winning team from RGU, which saw off stiff competition from Aberdeen University, comprised Alex Rae and Justine Anderson - both undergraduate students at The Law School.

Mooting allows students to demonstrate their legal knowledge and presentation skills acquired during their law studies while adhering to the protocols of a real court. The problem set to the students this year involved a civil Appeal on the issue of dispossession of borrowed property and whether the old Scottish remedy of spuilzie could be of use to litigants in such situations.

RGU lecturer Jonathan Brown said: "Both teams are given a problem scenario with a real legal problem set around a fictitious set of facts. They have to research a complex area of law, construct an argument which clearly and convincingly sets out why their client should win the case, and then deliver that argument in a way that will persuade the judge."

Commenting on their win, Jonathan continued: "We were absolutely delighted to win this year's Granite City Moot for the third successive time. Alex and Justine rose to the challenge and presented their arguments very well.

"This event is a great opportunity for students to test their skills in a real setting, in front of a real Sheriff and members of the local legal community. Public speaking skills and confidence only come with practice and moots are a great way to do this, showing students how their academic knowledge can be applied in practice."

Malcolm Mackay said: “Mooting and debating are practical ways of developing and honing litigation skills required of a court lawyer. Brodies are fully supportive of training and regularly support activities like this at university and junior lawyer level. Both teams did very well and Sheriff Summers, who kindly gave up his evening to judge the moot, said that this was a very closely-fought competition with little between RGU and Aberdeen.

“The preparation and quality of argument by the students meant it was an enjoyable night for participants and spectators alike. Brodies is delighted to sponsor this event for the eighth year running and we look forward to doing so again next year.”