A Robert Gordon University (RGU) computing graduate has been named Young Software Engineer of the Year 2016. 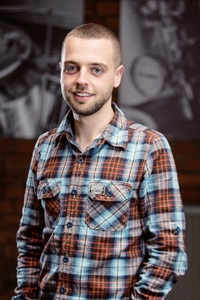 Stuart Whitehead, who graduated from RGU in July with a first class degree in Computer Science, won first prize at the coveted Young Software Engineer of the Year awards last week for his innovative project developing a software platform for ‘Internet of Things’ (IoT) applications.

IoT is the next technology wave, connecting sensors across the internet which will help enable smart cities, especially in the use of transport and energy, automated control systems and a myriad of small consumer focused solutions that will change the way we live, work and play.

Stuart’s project, which was deemed outstanding by the judges, sets out to simplify the way that IoT software and devices connect by creating a common 'plug and play' framework, rather than the multiple systems already available.

Stuart, who is from Cove Bay, explains: “The main aim of my project was to investigate the technologies which makes the IoT possible. Based on my research I developed two software components: a platform for the IoT which other developers could use to build IoT applications and a demonstration application, showing how the platform could be used.”

Stuart received a cheque for £2500 from first prize sponsor Sopra Steria and the Young Software Engineer of the Year trophy presented by ScotlandIS.

Commenting on winning the award, Stuart says: “It feels great to be awarded with this prize. Being recognised in this way is validation that my project and the effort I gave it was worthwhile. It also makes me confident to start my professional career, knowing that the skills I’ve learnt from RGU are valued by the industry.”

Stuart is now based in New Zealand after he relocated with his fiancée following his graduation from RGU’s School of Computing Science and Digital Media to pursue his dream job with design-led technology company Springload, where he develops websites and applications for a range of clients.

Dr Nirmalie Wiratunga, a lecturer at RGU’s School of Computing Science and Digital Media who attended the awards ceremony, said: “As his project supervisor I was extremely proud to see Stuart’s work being acknowledged in this way.

“SoftScot projects must demonstrate technical challenge, innovation, quality of engineering and good evidence of planning and organisation. With the IoT framework he was also able to create a commercially relevant solution which coupled with an excellent thesis presented a deep level of state-of-the-art knowledge.”

The awards are organised by ScotlandIS, the trade body for the digital technologies industry, and were presented at the ScotSoft2016 dinner on Thursday, October 6 in front of over 530 guests from across the industry.