Nursing research students and staff at RGU have welcomed the appointment of a new Clinical Professor with over 20 years’ experience working in healthcare education. 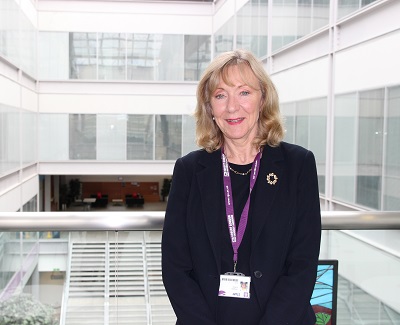 Professor Angela Kydd has joined the university as Clinical Professor in Nursing – a joint role between the School of Nursing and Midwifery and NHS Grampian, which will see her support academics and clinical staff in their research endeavours.

She will also work closely with Kay Cooper from RGU’s School of Health Sciences, recently named Clinical Professor in Allied Health Professions, as the two provide greater links for staff between RGU and NHS Grampian.

The role is jointly funded by both organisations, in another example of the university’s commitment to partnering with industry and public sector organisations for the benefit of students, staff and service users across the North-east.

Over the next 21 years, she designed and delivered degree modules in gerontology, led a Nurse Specialist in Gerontological Nursing programme and acted as programme lead for an MSc in Later Life, running her own Masters module on frailty.

During this period she completed her PhD in Nursing, focussing on the lived experience of older people classed as ‘delayed discharges’. She has been actively involved in Erasmus Intensive Programmes since 1998 and is a keen supporter of international student exchanges.

Professor Kydd would also go on to teach in Slovenia, Sweden, Portugal, Finland and Switzerland, and has worked with the World Health Organisation in a consultancy capacity for a nurse specialist programme in gerontological nursing and a training manual on using Cascade Plus Training for vaccine implementers.

She is an active member of COST action on Ageism and is partner to a Horizon 2020 project which will bring two global PhD students to the School of Nursing and Midwifery at RGU.

Speaking on her new appointment, Professor Kydd said: “I am looking forward to working closely with my new colleagues at both RGU and NHS Grampian as part of this exciting opportunity.

“It’s absolutely vital that educational establishments and healthcare providers work in partnership to ensure not only that students have a truly enriching learning experience, but that society can benefit from the results of such close collaborations.”

Professor Ian Murray, Head of RGU’s School of Nursing and Midwifery, said: “We are delighted to welcome Angela to the university and look forward to a long and successful working relationship.

“RGU has a long history of working with the health sector and this appointment can only lead to further improvements in the quality of research coming out of our School. In addition, given Angela’s specialism in gerontology, I am certain that our students will benefit from the lessons she can pass on.”