Research on the size and shape of the North Sea offshore workforce has revealed that some UK workers are larger than average American males and take up more space than earlier data had indicated. 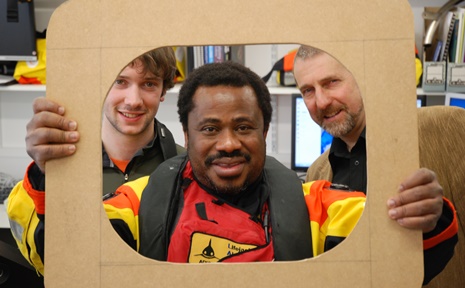 Charting their body dimensions has also cast valuable light on their ability to escape through a helicopter window. Bigger individuals are less likely to be able to do so than smaller individuals, but the study has shown that size isn’t everything.

The new findings from a joint research project into the size and shape of North Sea offshore workers by Robert Gordon University (RGU) and Oil and Gas UK in Aberdeen have been published in an academic journal following the completion of their high-tech study in 2015.

Using portable 3D scanning technology, the team measured 588 male offshore workers and extracted a total of 26 measures, including shoulder width, chest girth, neck girth, and a series of volumetric measurements of the arm, leg and torso.

Measuring workers in different standing and sitting postures and in form-fitting shorts as well as full survival suits, the research is the most comprehensive study ever carried out to date.

The measurement data – which will be available under licence from Oil & Gas UK – have informed the team’s focus on offshore worker’s body dimensions and their ability to pass in a confined space, and through a window frame representing the smallest acceptable exit window size on a helicopter.

It was prompted by industry recognition that existing size information on offshore workers was out-of-date, and although the workforce was heavier, how that had impacted on their shape and space requirements was unknown.

Using the measurement data the team has developed a prediction model of workers passing a simulated helicopter window egress, based on dimensions extracted from 3D scans of 404 individuals.

The frame size selected for the study was 432 x 356 mm and represents the Civil Aviation Authority’s (CAA) minimum acceptable size for an escape window on a helicopter.

Dr Stewart said: “Those who fail the window egress test are probably bigger in any single dimension than those who pass, but that probability is not 100% - it is between 70 and 80%.

“It seems that a few very large individuals can escape through this small aperture, and we should perhaps focus on trying to predict why some smaller individuals can’t.”

While larger individuals were less likely to escape through the window, the most accurate predictive test of whether a person would pass or fail would require 30 measurements.

However, using individual measurements or combinations of two or three together such as body weight, shoulder breadth and chest depth is nearly as accurate. Crucially, many of these can be measured manually without the need for 3D body scanning.

Dr Stewart said: “These findings show us for the first time the extra value of combining individual measurements, and the limitations of an approach which treats the body as a rigid shell in predicting window egress.

“In terms of allocating seats on helicopters, our study highlights a range of possible measurements which could be used to identify larger individuals who should be seated adjacent to larger windows.

“Although bideltoid (shoulder) breadth may be outperformed by other measurements, it is unquestionably the most practical and reliable to measure, and less affected by breathing artifacts than others we could have chosen.

“Short of assessing all 62,000 offshore workers in the North Sea by scanning or require them to do window egress trials of actual windows on helicopters, all of which are larger than the CAA minimum, we hope to augment the study with future work which will examine spine and shoulder flexibility.”

“By defining a simple, sustainable measurement criteria and together developing the Train the Trainer methodology, the industry was able to meet the deadline and avoid costs of £14 million.”

In a further study, the team also modelled the risk of workers failing to pass one another in restricted space corridors, based on measured shoulder breadth and chest depth measurements in 210 individuals, in comparison to other data from national databases.

Depending on the corridor width of the restricted space, the study estimates they are between 28% and 34% less likely to be able to pass one another than typical UK males.

Dr Stewart said: “Male offshore workers are bigger than we might have anticipated. Comparing our data with other national databases, they are bigger not only than UK civilians as a whole, but also Americans, who are considered to be the largest nation worldwide.

“While it has been previously known that protective service workers, such as firefighters, may be bigger than their host populations, offshore workers have never been reported in this way before.

“Larger individuals have increased space requirements which can compromise their ability to pass one another in a restricted width, and this is exacerbated when they wear the personal protective equipment required offshore.

“This has important implications in restricted space settings, particularly in terms of safety and as decommissioning starts to appear more likely in the North Sea.”

Mick Borwell, health and safety director with Oil & Gas UK, added: “Many offshore facilities were designed more than 40 years ago based on size information of offshore workers available at that time and which we now know to be very different today.

“The findings from the research will be invaluable to those designing future offshore safety equipment, survival clothing and space and accommodation requirements offshore.”