A recent graduate from Gray’s School of Art has been recognised for her eye catching glasswork at one of the biggest showcases for up and coming designers. 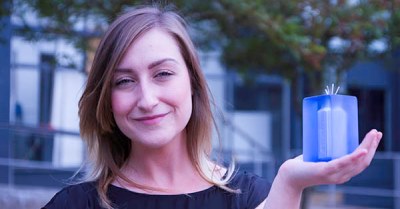 Cara Walker (25), who graduated with a BA (Hons) in Three Dimensional Design from Robert Gordon University (RGU) earlier in July, was announced as the runner-up in the Contemporary Glass Society (CGS) Award, during the New Designers exhibition in London.

Over 3000 design graduates, from more than 200 of the UK’s art and design universities and colleges, exhibited at the showcase this year which is attended by buyers, manufacturers and senior designers eager to spot the best fresh talent.

The Contemporary Glass Society has presented a number of highly coveted prizes for exceptional glasswork over the past five years at New Designers, with the 2014 judging panel made up of acclaimed glass artists David Reekie and Louis Thomson, together with Clare Maddison, director of Contemporary Applied Arts, and Karen Murphy representing the CGS.

Cara said: “Being presented with the Contemporary Glass Society runner-up award was an amazing experience and I’m really proud to have been part of it. The judging panel for CGS included one of my favourite glass artists, David Reekie, so having the opportunity to discuss my work with him was really exciting.

“I’m the first person from Gray’s to have won this award, so it was nice to be able to represent the art school in this way. The experience over all has definitely raised my confidence as an artist.”

Cara, who received vouchers for Creative Glass UK alongside a £100 promotional package, had focused on the subject of memory and family relationships throughout her final year at Gray’s.

She said: “We rely on our family members as much as we would rely on the functionality of a bottle and it is through these figurative objects that I explore the characteristics of my family, the people of most importance to me, whilst also addressing the subject of absence and presence within my own life.

“From strong masculine bottles, petite curved bottles, to poison bottles, some hold stoppers that are suggestive of what is contained, acting as the gateway to what is inside. Within the bottles are objects of great importance, objects that I associate with the subject or objects which evoke memories and a sense of nostalgia.”