A communal garden on the site of the old Craiginches Prison designed by a student from RGU’s Scott Sutherland School of Architecture and Built Environment has been officially opened by the Scottish Housing Minister, Kevin Stewart MSP. 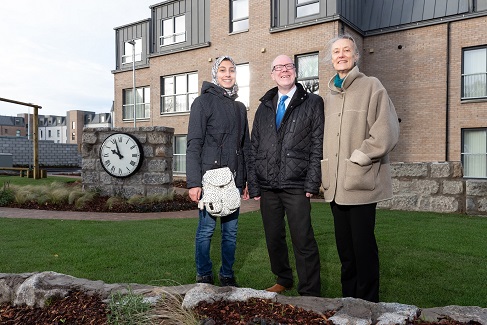 Lina’s design includes the face of the old prison clock and granite blocks from the perimeter wall.

Lina, now in her third year of studies, commented: “It must have been very saddening to see this wall come down but at the same time very liberating – that’s how I came up with ‘Break Free’.

“The design is quite simple. I basically reconstructed the wall but in a way that’s more interactive. The wall will be quite bulky at one end but slowly break down as it progresses through the garden. The people of Torry will be able to sit, relax and play around this wall.”

Housing provider Sanctuary has created the garden as a community benefit of the 124 affordable homes it is building in partnership with the Scottish Government and Aberdeen City Council.

j ’, a vice chair of Sanctuary Scotland Housing Association and designer in residence at the Scott Sutherland School of Architecture and Built Environment, said: “Lina’s design really embodies the brief for this project.

“It recycles the prison wall in a way that allows the new members of Torry, the young children, to have some connection with that past and yet to be inspired by this breaking free of constraint with something worthwhile and useful.”

Lina added: “It is overwhelming to finally see the design in real life after being on paper for so long. I'm am so thrilled! I do hope that the garden will always remind the people of Torry to always break free of their constraints just like they "broke free" when the prison wall came down.”